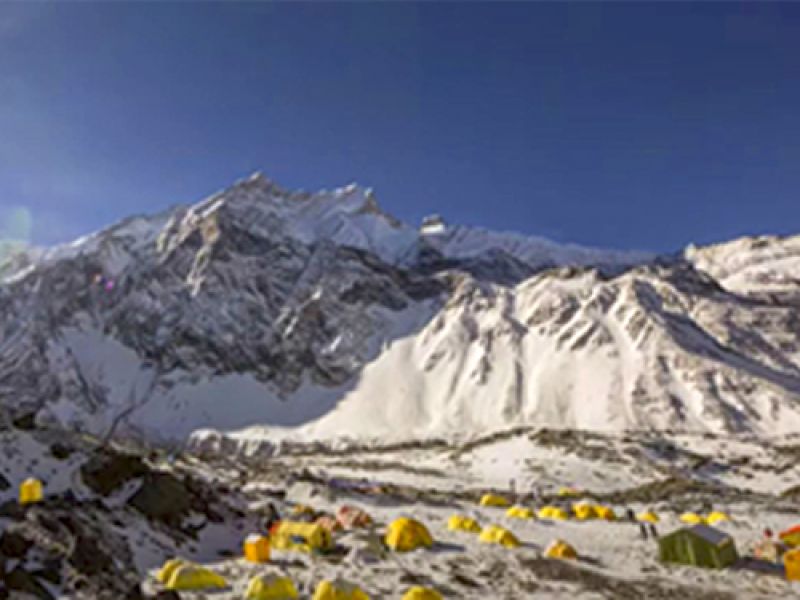 Annapurna I is the 10th highest mountain in the world with an altitude of 8,091m among 30 peaks in 55 km long Annapurna Massif. Mt. Annapurna gets its name from Sanskrit called “Anna” and “Purna” which means “Goddess of wealth and fortune” This peak is special because it was the first 8000 m mountain that was successfully climbed in history. Western and northwest slopes are bounded by glaciers that draw off into a great gorge cut through the Himalayan Mountains by the Kali Gandaki River.

Louis Lachenal and Maurice Herzog is the first person to keep his foot in the top of the Mt. Annapurna. And this is also the first 8000 m peak that was skied by Yves Morin in 1979. The Annapurna is actually the ideal 8000-meter peak with an impressive journey, technically comparable to Cho Oyu.

The fascinating mountains and forest areas make the Annapurna region one of the most enchanting spots on this planet. Annapurna Climbing is one of the most deadly mountains to climb with high risks of avalanches. All the routes possessing severe difficulties for climbers to overcome with huge ice cliffs and seracs. Hence, past knowledge of climbing with a good physical condition is highly advised for those seeking to achieve the summit of Annapurna.

Best Time for Annapurna I Expedition

If you are climbing to the Annapurna Base Camp then there will be not so big a problem about which time is best to visit Annapurna. But if you are thinking of clambering the trail towards Annapurna I Expedition, then it becomes a must to ascent during the best trekking season which is in spring.

Spring is the vital climbing season for the Makalu Expedition Nepal. In spring the climate is warm and views are clear. The spring season varies from March to May for three months. The chances of rain or cloud are less in relation to other times. The spring season is the most suitable for climbing because of warm weather, not so much snow deposited. The wind velocity might be challenging for this season but taking into consideration all kinds of factors, spring is the best climbing time for the Himalayas of Nepal.

Climbing Route for Annapurna I Expedition

Annapurna Expedition is total is 50 days expedition from the Annapurna North Base Camp. Other days are spent walking beautiful trails of the Annapurna region. You will start the expedition from Nayapul, following the circuit trial, we then enjoy the view of Ghorepani Poon Hill. From Lete, leaving the circuit trial we head west towards Annapurna North Base Camp. The summit offers a splendid view of the massif, leaving remarkably satisfied.

Climbing Difficulty for Annapurna I Expedition

Annapurna Expedition is best for both autumn and spring seasons. We will walk through the regular route, which is the southwest ridge. But, we will operate the expedition from southwest and northwest Ridge. From base camp, we will start our adventure to Camp I (5200m/17,060ft). Once you will do some training in the base camp then you will be ready to climb. In this part, you will encounter the mixed terrain. The initial section of the ridge is full of rock and glaciers. You will have to walk in the middle of the glacier slope of 25 degrees. It takes about 4-5 hours of the climb to reach Camp I and some stronger climber skip this camp and reach Camp II.

Climbing from Camp I to Camp II (5700m/18,700ft) is comparatively safer and comfortable, but you still have to cross the black rock wall before heading up the glacier. You will witness an intermediate ice section with some mixed climbing sections. You may encounter some 45 degrees of slopes during the climb. To reach Camp II it will take 4-5 hours.

Reaching Camp III (6500m/21,325ft) is the longest section in this expedition. In starting phase of walking you will be crossing glaciers from east to west. You will also have to cross a 55-degree wall which is about 500 m in length. There will also be exposed to cold and wind in this section. Although autumn is another best season for the Annapurna I Expedition there may be danger of avalanche. It will take about 5-6 hours of walk to reach Camp III

Climbing from Camp III to IV (7100m/23,294ft) is somehow short than other days. You will also witness a plateau where there are crevasses and seracs. Oxygen level will be deficient at this altitude from this level. You have to climb for about 3-4 hours on a steep 50 to 55-degree slope. This section is a little adventurous in the autumn season because snow slopes cover layers of ice making avalanches.

Finally, Summit day (8,091m/26,545 ft.) is the main aim during the climbing period. It takes about 12 to 14 hours of a long day to summit and reaches back to Camp IV. Most sections are blue ice and snow. In the early part, there will be an easy climb but as you reach higher you will cross several basins with short snow headwalls.

Gears for Annapurna I Expedition

Every expedition requires a specific arrangement of gears and types of equipment for the journey to make your journey easier. The following gears are recommended and should be brought, although we admit that our clients have their own choice. To know what to expect in the Annapurna I Expedition, we have provided some useful gear during the trek.