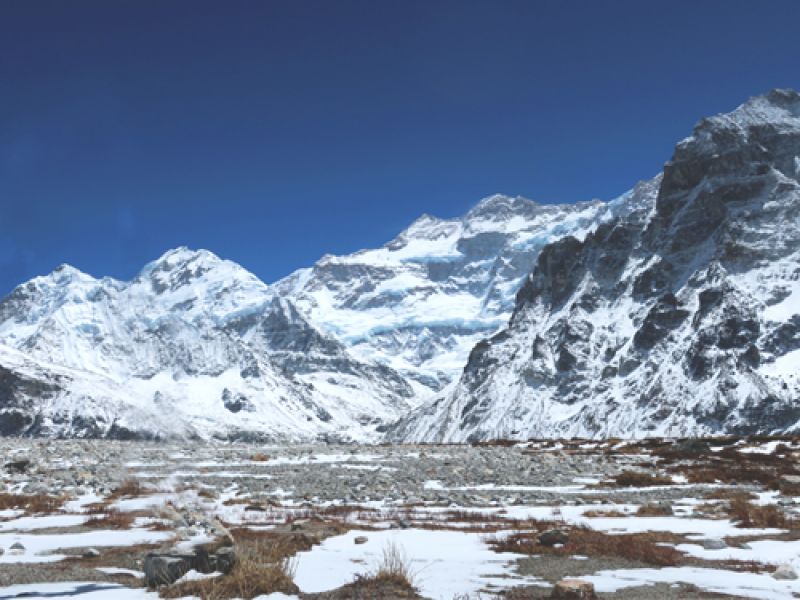 The ‘Five Treasures denotes five peaks” Kanchenjunga I (8,586 m), Kanchenjunga West (8,505 m), Kanchenjunga South (8,494 m), Central (8,482 m) and Kangbachen (7,902 m). Mt. Kanchenjunga is the 3rd highest after Everest and K2 and derived from the Tibetan word 'Kanchen' and 'Dzonga'. The 5 treasures of God referred to are salt, gold, turquoise, and precious stones, sacred scriptures, strong armor, grain, and medicine. Mt. Kanchenjunga was first ascended by a British team in 1955. Until 1842, it was considered the highest peak in the world.

According to the Lhopo people’s faiths, the five treasures of Kanchenjunga are hidden in the mountain slopes and will only reveal themselves to the devout when the world is in danger. The five treasures of Kanchenjunga include salt, gold, turquoise, sacred scriptures, invincible armor, and medicine. Some local people say that the mountain is home to the god Dzo-nga– a type of yeti.

The massif of the mountain forms a watershed to numerous rivers of the area. The main peak of Kanchenjunga is also the source of four main glaciers that flow in the region. Five glaciers of Kanchenjunga Massif includes: Zemu, Kanchenjunga, Yalung, Talung, and the Ramtang. They drain down to form several striking rivers, the Sapta Koshi River (792 km in length) in Nepal that finally flows into the Ganges River, and the Teesta River in India (315 km in length) that makes its way through India to the Bay of Bengal in Bangladesh.

When seen from the Antu Danda viewpoint of Illam, the Kanchenjunga massif looks like a white rugged wall hanging from the sky. There are 4 climbing paths to summit Kanchenjunga Mountain, three lie in Nepal and one in India and we will ascend from the Nepal side.

The journey crosses through a region populated with Rai and Limbu ethnicities, with unique languages and customary costumes and lifestyles. This area is also a shelter to rare and exotic wildlife including the snow leopard, Himalayan black bear, musk deer, red panda, and many species of birds. The biodiversity of flora and fauna will be another highlight while you are trekking to the Kanchenjunga Base Camp. The striking mountains, rugged terrain, beautiful landscapes, and welcoming people will leave you with a feeling of deep serenity.

Spring is the vital climbing season for Kanchenjunga Expedition Nepal. In spring the climate is warm and views are clear. The spring season varies from March to May for three months. The chances of rain or cloud are less in relation to other times. The spring season is the most suitable for climbing because of warm weather. The wind velocity might be challenging for this season but taking into consideration all kinds of factors, spring is the best climbing time for the Himalayas of Nepal.

The autumn season starts from late September to November. It is the second-best time for a climbing adventure in Nepal. The beautiful rich green hills of the lower part and the crystal clear Himalayas are the major features of this season. Autumn is the most suitable for savoring views of clear nature and a suitable time for climbing the mountains.

Our expenditure begins with the scenic flight to the Taplejung. Hiking through the majestic territory we will head toward the base camp. As the trail goes uphill, we will get closer and closer to the magnificent Himalayas. As we reach the base camp we will meet our crews and refresh our climbing skills. We manage a crew of porters or yaks to transport gears, including food and tent, tables, chairs. During the base camp stay, we will soak into the beauty of the surrounding area while we become accustomed to the altitude.

Kanchenjunga is the 3rd highest peak in the world and one of the most difficult peaks to climb among 8000 m peaks. The constant threat of snowstorms and avalanches makes this expedition more dangerous. Near the top, the oxygen in the air is about a third at sea level, unpredictable weather conditions and snow slip at every step is the most challenging part of this expedition.

Every expedition requires a specific arrangement of gears and types of equipment for the journey to make your journey easier. The following gears are recommended and should be brought, although we admit that our clients have their own choice. To know what to expect in the Kanchenjunga Expedition, we have provided some useful gear during the trek.