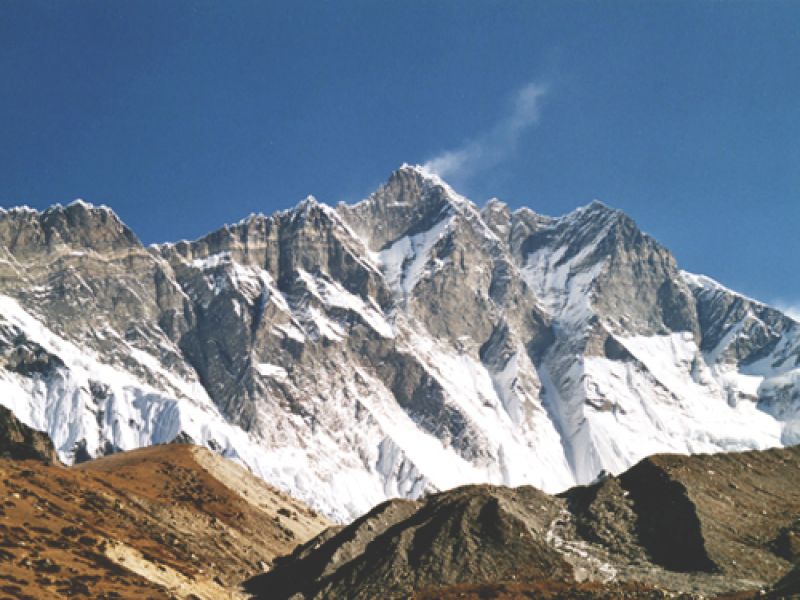 Lhotse is known for its closeness to Everest and it is the 4th highest peak in the world. Lhotse has three summits, of which the lowest is 8,383 m high (Lhotse Shar). Next in order of altitude is Lhotse East, also known as Middle, standing at the height of 8,413 m. The highest peak at 8,516 m is called Lhotse Main. Ernst Reiss and Fritz Luchsinger first climbed Main Lhotse in 1956. Sepp Mayerl and Rolf Walter first climbed Lhotse Shar on December 5, 1979.

The entire expedition is planned for 56 days. Kathmandu is the origin and endpoint of the Lhotse Expedition. Along the way, you will visit the Namche Bazaar, immersing in local tradition. We also walk through the main Buddhist center in the region – the Tengboche Monastery. It takes about 4-5 days to reach the foot of Mount Everest. You will be blend with the picturesque panoramas of the surrounding mountain ranges and forests.

The climbing route for the Lhotse Expedition follows the same journey as Everest. The route progresses through Khumbu icefall. Moving further, we will reach Camp I that exists at the top of Khumbu icefall that is surrounded by crevasses. From Camp I, we will pass through a lateral moraine to the west ridge that embraces us with a close-up view of Lhotse. This place is perfect for Camp II. Going from Camp II, we will reach near to Lhotse wall crossing glaciers and ice cliffs where we will set Camp III. Camp IV is near South Col. From Camp IV, we will continue through steep rock segments to the peak.

Spring is the vital climbing season for the Lhotse expedition Nepal. In spring the climate is warm and views are clear. The spring season varies from March to May for three months. The chances of rain or cloud are less in relation to other times. The spring season is the most proper for climbing because of warm weather. The wind velocity might be challenging for this season but taking into consideration all kinds of factors, spring is the best climbing time for the Himalayas of Nepal.

The autumn season starts from late September to November. It is the second-best time for a climbing adventure in Nepal. The beautiful rich green hills at the lower part and the crystal clear Himalayas are the major features of this season. Autumn is the most suitable time for appreciating views of clear nature and a suitable time for climbing the mountains.

There are ample records of successful ascending to Lhotse in the autumn season. The best weather, proper climbing routes, and less dangerous snow slides in the autumn give more possibilities of a successful summit over Lhotse.

The expedition to the Lhotse route progresses through the Khumbu icefall. It follows the same route of Everest ascent, up to a point above the Yellow Band. Then, the routes for Everest’s head to the left of South Col, and Lhotse climbers turn right.

The route progresses through Khumbu icefall. Walking further from the foot of Everest, we will reach Camp 1 (5,900m/19,500ft) that exists at the top of Khumbu icefall that is surrounded by crevasses. From Camp I, we will cross a lateral moraine to the west ridge with a close-up view of the magnificent  Lhotse. This place is perfect for Camp II (6,400 m/21,000 ft.). Leaving Camp II, we will reach near to Lhotse wall by crossing glaciers and ice cliffs where we will set Camp III (7,300 m/23,700 ft.). From Camp IV (7,900 m/25,912 ft.) we will continue through steep rock sections to the summit.

Summiting Lhotse is the difficult part, but many adventurers dream to be at the top. However, they have to understand the risk and gain some experience. Lhotse Expedition has to be prepared in detail, but before ascending they have to devote a long time to build stamina and train to get used to harsh conditions. It is worth cherishing, that the most demanding it is to get by in the “death zone” at 8 000 meters above sea level. The body starts to strike against the reduction of oxygen. Even the most skilled climbers may feel weakened, strokes, heart attacks, or hard-to-win altitude sickness.

The unique point of this journey lies in passing the Khumbu Icefall and the Lhotse Face. While Lhotse is recognized for its rough weather conditions and unpredictability, this glacier features crevasses and seracs scattered all over the way. With this in mind, The Himalayan Odyssey provides professional guiding services and gears required for prosperous ascending. We will be prepared to overcome difficulties while Climbing Mount Lhotse.

Every expedition requires a specific arrangement of gears and types of equipment for the journey to make your journey easier. The following gears are recommended and should be brought, although we admit that our clients have their own choice. To know what to expect in the Lhotse Expedition, we have provided some useful gear during the trek.