Mani Rimdu Festival Trek 2022: All You Need to Know

The Nepal Himalayas remains a special attraction because of the diverse and vast landscape that is bedded with the amazing biosphere and dotted with various glaciers and lakes. Further, the presence of endangered wildlife species marks a significant place for explorers. But if you are trying to explore the Nepalese Himalayas more deeply and capture the aged and definite culture, then Mani Rimdu Festival will be great for you. You can witness this festival if you are on the way to Everest Base Camp.

What is Mani Rimdu Festival?

Mani Rimdu is a sacred Nepalese Himalayan festival celebrated at Tengboche Monastery of Solukhumbu, Nepal. The name “Mani Rimbu” means ‘Mani’ means “part of the chant “ and ‘Rimdu’ means “small red pills” that are blessed during the festival. During Mani Rimdu Festival, the red pills will bless and then share with all those who visited this festival. It will celebrate for nineteen days, which ends with three days of public festival. It is held during the tenth lunar month of the Tibetan calendar, which lies from October to November from the Gregorian calendar. The family of Sherpa people meet with their friends and family and celebrate this festival. Lamas and Sherpa gather at the monastery for five days for the ceremony. If you are planning for the Everest Region Trek, then between September to November is the best. This festival is the biggest culture of the Sherpa people of Nepal.

Why do people celebrate the Mani Rimdu festival?

All festivals have their own individual purposes to be celebrated. And in regards to the Mani Rimdu festival, it is for the remember to Buddhist preacher Guru Rinpoche. The festival is wonderfully celebrated to remember the form of Buddhism. During this festival, many masked dances and rituals are performed. During the Mani Rimdu festival, the monks perform 16 different dances which indicated different stories. This dance is only performed on the occasion of the Mani Rimdu festival. These special monks who are permitted by head monks wear special types of colorful clothes and mask during the dance. During the ritual, the dance is the real performance of past stories of a goddess rather than fun, so it is a sacred ceremony. This is a story about the failure of demons by the goddess and preserves good people from evil.

The monks wear special customs and detailed colorful masks through a set of ceremonial dances. They also play the trumpet, Kangling (made by human thigh bone), conch, and drum during the dance. All the monks of the monastery perform chanting and following rituals according to their traditions. The first day involves prayer day and the second day involves colorful Lama dancing with brocade gowns and masks. On the last day are performances amusing dances and chanting. Then the Head lama offers Wang (blessing/empowerment) to the public who participated there. 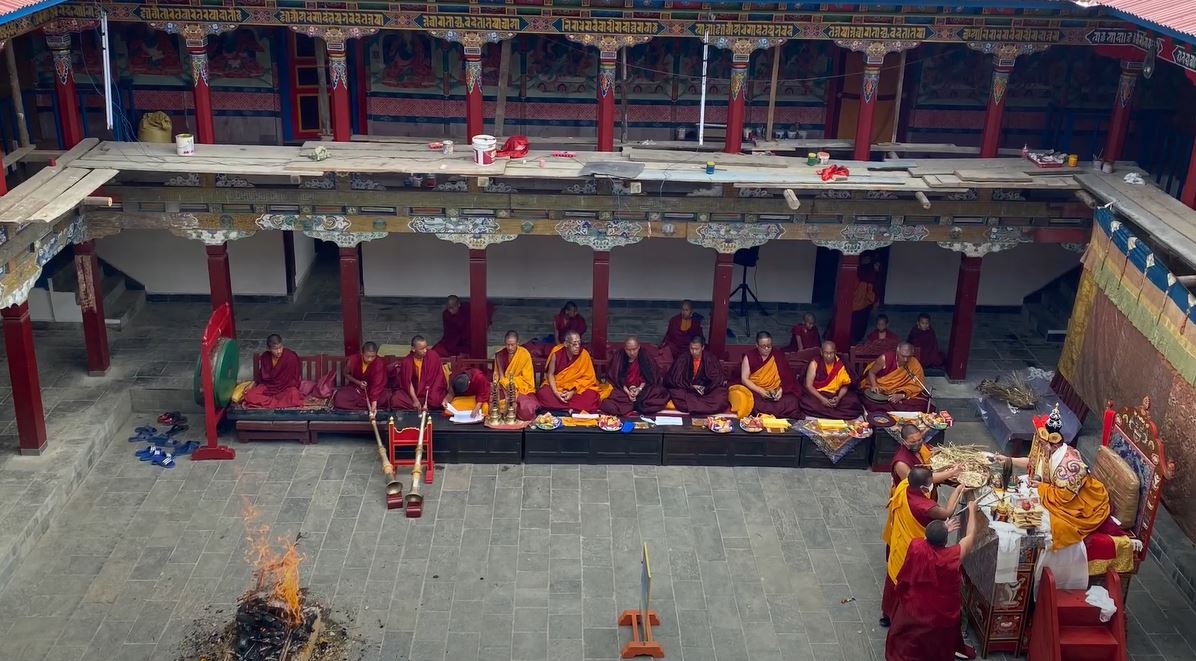 When is the Mani Rimdu festival in the year 2022?

The festival date of the Mani Rimdu is fixed by the head of Lama at Tyangboche monastery according to the Tibetan Lunar calendar. This festival is performed in the 9th month of the Tibetan calendar which usually falls in the full moon of October or November month. This year Mani Rimdu festival at Tengboche is going to be declared the fix date by the lama on February 2022.

There are six steps to prepare the Mani Rimdu Festivals:

The sand mandala is a symbolic design with colored sand which is very important for any Buddhist ritual. It takes around 10 days to complete the sand mandala for this festival. After the completion of the mandala, defensive blades are used to make different designs and symbols of gods. After the final stage of the mandala, spiritual medicine is kept in the center of the mandala. During the ceremonies “Om Mane Padme Hum” is chanted by the monks. It is assumed that this ceremony will support delivering kindness and blessing from the mandala to everyone at the Mani Rimdu festival.

Wong is another important ritual during Mani Rimdu Festival. On this day, Tengboche Monastery will be open for this festival. Generally, Wong is held in the 10th month of the Tibetan calendar.

On this day monks wear the colorful mask of the demons and protractors and then perform the drama of trailing demons by the protractors. The theme of Chham is the victory of positive energy over negativity. It is also believed that the Chham of the monk takes the form of the divine being. This dance is sacred because it is only done during the Mani Rimdu Festival.

In Buddhist and Hindu culture fire is considered spiritual and we worship them. On this day, they do fire puja to offer the Agni (the fire god) and gods of the mandala.

Basanta is the author who inspires and motivates his readers with enthusiasm and dedication. He works as a travel writer and editor for The Himalayan Odyssey. He covers the various topics of Nepal with his clean and visually appealing writing — rich and descriptive —he lures his readers in. Full of travel tips, and amazing writing his articles appeared sound advice and consistent content.

He is doing a Master in Tourism and Hospitality from Tribhuvwan University which also helps him to write excellent travel content. He loves to do trekking and also has a great eye for photography.